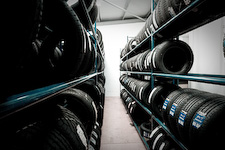 With petrol prices rocketing and "green" being very much on the agenda, ultra low rolling resistance tyres are very much in fashion with the tyre manufacturers in 2009. With the hype has come a lot of questions regarding the fuel savings involved, and uncertainty as to whether there's a trade off in grip and performance to achieve the reduction.

Fortunately, the excellent American tyre reseller tirerack.com has tested 7 tyres ranging from the latest in fuel saving rubber, to the softest "comfort" tyres money can buy. There's a link at the end of this page to the full article which we suggest you read, but for now we'll continue the tyrereviews tradition and summarise the results.

The car they used was the Toyota Prius. Fitted as stock with the Goodyear Integrity which tirerack used this as the base line for the tests. The Goodyear Integrity was a leading ultra low rolling resistance tyre in 2007, but is now comparatively old technology. All the tyres were new, and the test route was a 6.6 mile loop for a total of 550 miles on each tyre. Instead of relying on the on-board computer for MPG figures, tirerack used a Race Technology DL1 GPS data logger to monitor distance coupled with a Linear-Logic ScanGauge IIs to monitor how much fuel was used! Onto the results.


Surprisingly there is just 4 mpg extra between the best fuel efficient tyres compared to the drag heavy "ComforTred". Keeping in mind the test vehicle was the ultra fuel efficient Prius, it's safe to assume you might see a larger percentage saving on a less efficient vehicle. Over the average 15,000 mile year, the difference above (calculated with petrol at ?1.10 / litre) works out to an ?88 saving.

Now the efficiency question is answered, at what cost does that ?88 come in grip? The ever thorough Tirerack took the Prius to the test track to test the cornering and braking ability of each tyre in both dry and wet conditions.

Unsurprisingly the dry weather results were all fairly close, but the stark contrast between the best and the worst tyre in the wet is a testament to how far the new breed of ultra low rolling resistance tyres have come in 2009.

Are ultra low rolling resistance tyres ready for mass adoption? It's safe to assume any "normal" sports tyre would have excelled in the performance tests compared to the ComforTreds average result, and with the ComforTreds double layer of rubber, a normal UHP tyre would have closed the gap in fuel economy too making the petrol saving over a year even smaller.

Tyrereviews has always been about tyre education, allowing you to pick the best tyre for your own needs. On that basis, we will leave you to answer the above question. Any comments or questions, please feel free to make them below.

If you're after more data, we strongly suggest reading the full article at tirerack.com!