The Michelin Pilot Super Sport is one of the most talked about tyres on Tyre Reviews. It offers extreme track performance blended with balanced road manners and mileage that has yet to be rivalled, and as such it's an extremely popular tyre with performance car drivers such as BMW M cars, Porsche's, Ferrari's and many other hypercars.

With this in mind, we thought it would be a good time to have a look at what went into the development of the Pilot Super Sport, and how you should treat them to get the maximum usable life from them.

It's widely known some of the ex Michelin Formula 1 team were put on the SuperSport project after Michelin withdrew from F1. How much of the technology was transferred across?

- Ok. Some of the Compound and casing developers on this project were directly involved in our motorsport program in the era of F1. The same guys have also been involved in designing tyres for Le Mans and Endurance racing. Our team doesn't really split down motorsport/road tyre lines. So when we say track to street we mean it. Not only do we transfer directly some materials from one type to the other, but also industrial and production techniques. There are some things we do with the SuperSport (& Cup2) that you can't do in motorsport, e.g. dual compounds, and in some ways the PSS & PS Cup2 are more advanced than the motorsport tyres. We have transferred technology directly, simply because it works. Our Formula-e tyre and 18" WRC Tarmac tyre are virtually the same pattern as the PS Cup2, and similar to the PSS.

How different is the Pilot Super Sport to the tyre it replaced, the Pilot Sport 2?

- Very. The PS2 was developed during our time in F1, but was a significant step at the time over the original Pilot Sport. The Pilot Sport 3 is a tyre with a different philosophy slightly. It's not a tyre as suited to track work. The Pilot Super Sport has really taken over that part of what the PS2 was capable of. We still had a few homologation and fitments with PS2 that are still working well years down the line (Boxster/911 and some "M" BMW's). There's always a bit of "family resemblance" between generations of tyres, as what we learned we don't unlearn, but in the case of Pilot Super Sport, it uses a totally different production technology compared to PS2. Therefore, it's a new approach, as the factory processes allow us to do things we could never have done with PS2. Meaning materials can be used now that couldn't have been used successfully with PS2.

What sort of break-in / warm-up treatment would you advise for the Pilot Super Sport?

- I'd always encourage an initial 50-100 miles of a "bedding-in" period, simply to remove any mould release from the tyres (all tyre manufacturers tend to spray the inside of the mould with a silicon type spray to allow the mould and tyre to separate post curing, it's what gives them the shiny look). This can't often be the case with track work, but I'd say give the tyres a lap or two of gentle work to bed in and just slightly warm up prior to giving them any hard fast work. From a warm up perspective, same really applies. For track work, I'd give it a couple of warm up laps to build heat and pressure in the tyre, before asking it to give it's full potential. Often common sense too as it warms the car and brakes up before hitting them hard. For road work, it doesn't apply as much, but if you pull out of your drive on a cold winters morning, and hit the throttle hard at the end of the street pulling onto the main road, don't be surprised if you spin the wheels. You need some heat in them to get optimum grip.

What about heat cycling on the road or track?

- The Pilot Super Sport won't really go through a heat cycle from road use. It never reaches extreme temperatures, and yes, while you might "give it some beans" at some point on a fast Sunday drive, it's never sustained for long periods with the tyre doing high energy lateral and longitudinal work. Where as on a track, it's both and sometimes with and sliding or power, for sustained periods and followed by cooling (after a session). Hence heat cycling does affect the level of grip, primarily after track work. It will lower the peak grip, but only by a small level. After hard track work the more dominant factor could be wear and damage to the tread, reducing grip more by the fact you have reduced the amount of rubber in contact with the road.

So what are the best practices for longevity and grip throughout the tyre life?

- It's really a balance between not "killing" the tyre and giving it a good workout. Whilst I do expect a lot of customers buying the PSS to drive them hard, on road and track, a little bit of common sense and smoother driving will often yield the best results. Don't overdrive the tyre. whilst it looks good going sideways with smoke emanating from the tyre. If the tyre isn't gripping, come back off the throttle slightly, correct the steering and you'll find the tyre coming back into it's window and grip circle. Even Lewis Hamilton can't get more grip than a tyre has. It's about keeping it within a manageable window. Listen to the feedback from the car, and adapt. On tyre life and wear, again it's all subjective, but you'd be surprised how few tyres come off with even flat wear. So keep on top of camber and toe, and adapt as required. 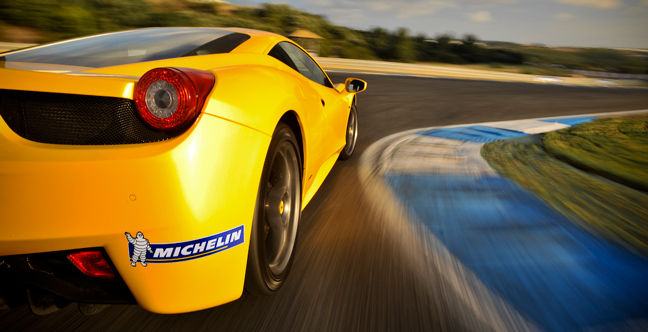 How will the tyres dry / wet grip balance change on the way to 1.6mm?

- Remember that all the tread grooves do is help clear the water from the contact patch to allow the tyre to actually grip a slightly dried road surface. Therefore, on a slightly damp surface there shouldn't be a significant difference between a new tyre and a worn one. (Assuming even wear). The wet braking grip will deteriorate with most tyres, by about a car length @ 50mph from new to worn. So the shift in weight braking is small. With Dry braking, in some cases it may actually slightly improve with a worn tyre, as there is less movement from the tread blocks. However it's small (1-2m). Therefore I'd always say it's better to have a bit of tread depth, but I would never be panicking to take at tyre off at 3mm

Can you use the tyre safely past this on track assuming even wear?

- Yes, within reason. As remember once you get down to the bottom of the tread depth, you are only a few mm away from starting to wear out the belts and carcass. Which could be a disaster. Plus the tread rubber offers grip, some rubbers under the tread are only there to bond other components together. I'd ask people to exercise a great deal of caution. Worn tyres might do one track day.. but that's again assuming that the tyres are worn evenly. It might be 1.6mm on the outside and worn more excessively on the inside. I'd certainly never advocate under 1.6mm on the roads, as it's against the law. So the safety and legal implications aren't worth the risk on the road.

A big thank you to Michelin for taking the time to answer our questions. For more information on the Michelin Pilot Super Sport, please read our user reviews and test ratings. Any further questions? Please ask in the comments below!