Firstly I think it only right that I point out my own personal prejudices / preferences to dark art of black circles that we all rely on so much. Whether it's two or four wheels, I have at some point in that vehicles life ended up on Michelin rubber, having tried various other brands or OEM fit. For me they just work and more importantly feel right.

For the last 3 years I have been using Michelin Pilot Road 2s, covering just over 25,000 miles annually. With this in mind I was asked to try the Dunlop's latest Sport/Touring tyre, the Roadsmart IIs. 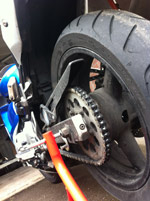 Switching from the much loved and very (square) used Michelin's to shiny new Dunlop's was always going to be difficult to get a good first impression. New rubber equals "new bike" even staying with the same brand. However, after a couple of days of cold and wet January, initial impressions were very good. At least as good as the Michelins I recall.

Even in cold, damp conditions they certainly warm up quicker than the Michelins, which was a welcome surprise.

Having scrubbed the tyres in on the daily commute I started to get a feel for what the Dunlop's are really like. Whilst in many ways they are very similar to the Pilot Road 2s, there are some added benefits.

Initial turn in is very positive and stable, almost like the bikes steering is faster than before. This has helped changing direction, especially carrying any sort of speed, with the effort required to get the bike from one side to the other reduced. Maybe down to the profile of the tyre being slightly "pointier" than I'm used to, more on this later.

Once settled into a bend, stability is excellent and inspires lots of confidence, especially in the front end. On a long constant radius right hander I encounter everyday the Michelin's could get a bit twitchy over a big bump mid corner, the Dunlop's dismiss the bump as if its not there.

The biggest shock for me comes on the brakes. The Dunlop's really bite into the road, pulling up very quickly indeed.

Living with the Dunlop's 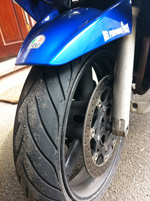 Having lived with the Dunlop's for just over 2500 miles and some dry (warmer) weather as well, I have a much better understanding of this impressive tyre. Positives so far then, however there is a downside, tyre pressures. I normally check mine at least once a week but am now checking at least twice as the Roadsmart seem much more susceptible to a drop in pressure. Drop a couple of psi and I've noticed a twitchiness that can cause concern, especially with larger lean angles. Again this is on direct comparison with the Michelin's. However, stay on top of the pressure and it's not an issue. A small price to pay!

The other concern will only materialise with more mileage, tyre life. Given the aforementioned profile of the tyre, I have some concerns of them squaring off more quickly, taking the edge of performance and blunting the advantage over the Pilot Road 2s. The Michelin's lasted amazing well, I regularly got 10,000+ miles out of a rear. Time will tell and I will report back at the end of the Dunlop's life.

For now, how would I sum up the Roadsmart IIs? Mightily impressive. Definitely on the "sportier" side of Sports Touring. Would I buy another set - time will tell but on the performance so far, definitely!

So time has told, and these very impressive Dunlop's have found a convert, so yes I would buy another set.
Having now covered just over 9,000 miles on the Dunlop's, how are they performing? In short, still mightily impressive.

My initial concerns over the squaring off, particularly with the rear, seem to be holding true at around 4,500 miles. However, from that point on the squaring has remained stable and consistent with the rest of the wear. In fact a quick blast along some twisty roads or circumnavigating several roundabouts has helped re-profile the tyre, something the Michelin's weren't so happy with.

The other surprise is the front tyre. It still looks like new to me, squared of a little, but still provides that same initial bite, mid corner stability and confidence as the day I had them fitted.

(Hopefully the pictures show how nicely these have worn and how much tyre is left even after 9k of mileage).

The one downside remains. Tyre pressures. As previously noted these RS2s are very sensitive to movement in tyre pressure. This is a small price to pay for the obvious benefits.

So time has told, and these very impressive Dunlop's have found a convert, so yes I would buy another set.