The new Dunlop Sport Maxx Race 2 is here! It's exclusively found on the brand new Porsche 991 911 GT3 Gen-2, and we've visited the Nurburgring to find out about this new extreme performance track day tyre.

The original Dunlop Sport Maxx Race was the first time a Dunlop semi slick was homologated for a Porsche GT model, and the first time the Michelin OE dominance on Porsches exotic models was challenged.

Initially new owners felt "short changed" if their new GT3 model came fitted with the Dunlop tyres instead of the more established Michelin, but customers very quickly found that the Dunlop was every bit the match for the Pilot Sport Cup 2, and in one objective magazine group test the Dunlop beat the Michelin in raw pace on the previous generation GT3 (Dunlop Sport Maxx Race (NO) 1:12.1 min, Michelin Pilot Sport Cup 2 (NO) 1:12.5 min, Michelin Pilot Super Sport 1:13.7 min.)

Continuing from the success of the original Dunlop Sport Maxx Race, which is also available as an aftermarket fitment, Dunlop have concentrated entirely on making the best tyre possible for the new Porsche 911 GT3. The new tyre, which takes lessons learnt from Dunlop's vast involvement in all levels of motorsport promises to offer more grip, better steering feel, and a better balance for the new 911 model. The ultimate example of tyre and vehicle working together. 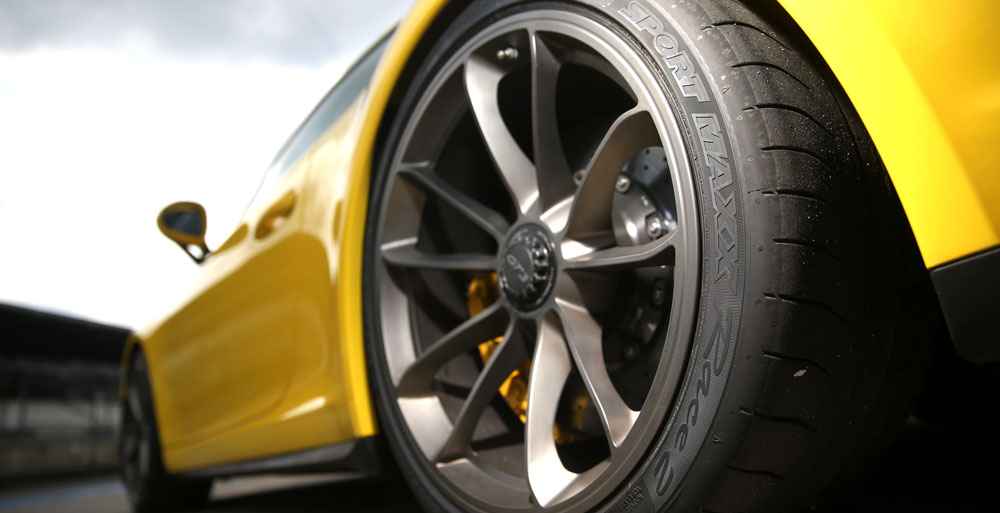 During development of the tyre, Dunlop made use of their vast resources. The Sport Maxx Race 2 was developed across four development centres across the globe, and tested at no less than six of their own test facilities and three further tracks, which allowed Dunlop to ensure the tyre worked well across a wide range of temperatures and conditions.

Despite their name, regular ultra high performance road tyres can't be one trick ponies. As they're fitted to cars which are generally used daily, they need to work in all conditions, from freezing wet to a warm summer drive, and also need to offer good mileage and a good level of comfort.

Conversely, track day tyres like the Dunlop Sport Maxx Race 2 are far more performance focused. They sacrifice points in categories such as comfort and noise, or aquaplaning resistance, in search of the ultimate driving pleasure, raw grip and lap time. This is a tyre which is most at home on a warm country drive, or track.

To achieve the improvement in performance, Dunlop have worked on all aspects of the tyre. There's a new belt system which keeps the tyre tread flatter at high speeds, helping handling, a new compound which offers improved grip and warms up quicker on road and track, and a new tread pattern with "massive outer shoulder blocks" to give excellent dry handling and feel.

All this technology is great, but how does it translate in the real world on the new Porsche 911 GT3? To prove the new tyres credentials, Dunlop arranged a passenger lap around the Nurburgring with the head Porsche test driver, Timo Kluck.

During the extremely quick lap of the Nurburgring, the new Dunlop had to deal with all types of tarmac, loads and speeds, and given how close the armco is at the Nurburgring, we're happy to report the tyre performed incredibly well and even felt like a slick at points such was the levels of grip.

The question everyone will want to know is how does it compare to the Michelin Pilot Sport Cup 2 on the new GT3. The test driver, professional as ever, refused to go into time details of the two tyres, but did leave us with this nugget of wisdom.

"Each tyre has their own characteristics. The Dunlop has always been a little softer on the front axle which means improved comfort but slightly reduced steering precision. Both tyres meet the rigorous requirements of the Porsche Motorsport OE program, and as such the performance is nearly identical. Both tyres are excellent".

Hopefully in the near future Dunlop will launch some further sizes of the Dunlop Sport Maxx Race 2 and we can see it in a tyre test against its peers, but for now, if you're new 991 911 GT3 comes fitted with the Dunlop Sport Maxx Race 2, you can be sure thanks to years of tireless development and testing from Dunlop, the tyre will allow you to extract the best from the car.