With all season tyres all the rage in 2015, Firestone have launched their take on this quickly growing sector, the Firestone MultiSeason.

Aimed at the price sensitive customer who "enjoys the pleasure of driving, but isn't willing to change tyres seasonally", the new Firestone MultiSeason is for moderate climates which are characterised by wet and mild winters. This seems to describe the UK perfectly! The launch size range targets "small to compact to lower medium cars" representing 70% of all new car registrations in 2013, with the new line up (13”-16”) covering approximately 90% of the total all season market demand.

The new tyre has been developed from a winter background, which means it has wet and snow ability in its DNA. The engineers then balanced the pattern, carcass stiffness, construction and compound to get the correct balance of all season dry, wet and snow performance, while improving the comfort and rolling resistance of the tyre.

To help TyreReviews experience the new technology, Firestone equipped a Fiat 500 L with the new tyre in 205/55 R16, and set up a number of dry, wet and even snow tests.

The dry testing was a real world test - public roads. Sadly there was no comparison tyre to benchmark the new tyres performance in the test, however the new MultiSeason performed exactly as you'd expect. It was quiet, comfortable, well mannered around the limits of grip and offered a strong braking performance. It perhaps wasn't quite as sharp to steer as a pure summer tyre, but as an everyday tyre on a small car like the 500, it performed admirably.

The wet testing involved a private runway, a coned circuit and lots of sprinklers. Due to the uneven method of wetting the surface, there were puddles and streams of running water, but the MultiSeason cut through them like they weren't there. Again, without a comparison tyre it was hard to work out exactly how good the tyre performed, but it offered no surprises, and felt like it had plenty of performance during high speed handling and emergency wet braking.

The critical part of any snow test is whether a tyre has enough traction to get you up a snow covered hill, and whether it can safely stop you on the way back down again, and the good news is the MultiSeason definitely can. In the hard packed snow of an indoor ski slope, there was no issue getting the Fiat 500 L to the top of the hill, and no problem stopping it on the way down again! The MultiSeason felt as sure footed as a winter tyre would in that situation, which is the highest praise we can give.

As an all season tyre, the new Firestone MultiSeason performs exactly as you'd expect. The only area we didn't test was wear, and Firestone have promised it will wear like a summer tyre. The label scores come in as C in wet grip and a C or an E in fuel efficiency, which has it bettering or equalling the all season offerings from Uniroyal, Kleber, Hankook and Vredestein.

Perhaps not quite as strong as the premium Michelin CrossClimate, the MultiSeason will be significantly cheaper. 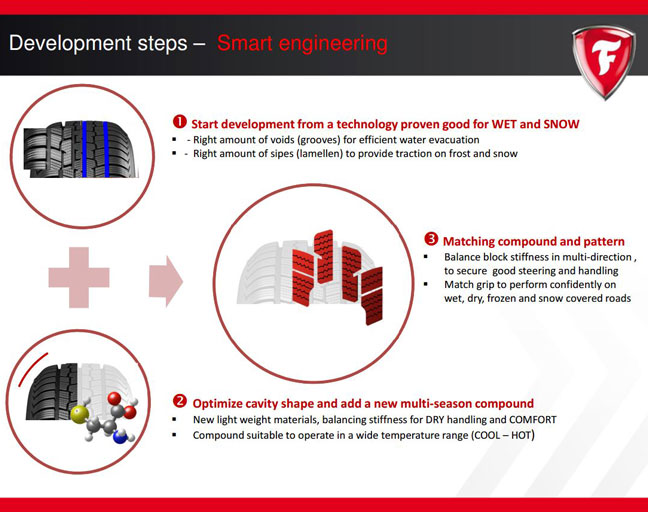