In Spring 2015, Michelin unveiled a new breed of all season tyre, the Crossclimate, which promised to address the shortcomings of traditional all season tyres in the warmer, dryer months for places such as most of the uk and areas of europe. The remit being to provide the performance of a summer tyre whilst being able to conquer the relatively small degree of snow, ice and cold experienced during the winter months.

Around the same time Goodyear also released the vector 4 seasons Gen 2, a completely new successor to the universally acclaimed Vector 4 seasons, which also promised to address the balance of all season tyre performance.

Tyre Reviews decided to investigate further, culminating in the 'Does a true all season tyre exist?' test. The outcome of this was that the CrossClimate genuinely did prove itself to live up to the claims, and was way ahead of the Vector in the dry, being almost identical to the summer tyre.

The question remained however, away from the controlled test track environment having undergone  just a couple of days testing, how the Crossclimate would fare out in the real, day to day world during 'normal' use?

Well, there remained a stack of tyres sitting in an industrial unit twiddling their thumbs which Jonathan, along with some input from myself, was wondering what to do with...  The answer, a fairly obvious one at that, arose from the deliberation.  Why not fit the Primacy 3 for a few months to gain a reference point, then exchange for the Crossclimate giving a direct comparison, on the same vehicle, undergoing the same general day to day usage? Follow that by continuing to run them throughout the winter into summer to evaluate the cold and some warmer weather credentials then swap back to the Primacy for a refresh of their qualities, and we have a test!

One trip back to MIRA to collect the rubber, and here we are with a long-term, real life evaluation.

Why choose this summer tyre in particular for comparison? Well, for one, we already had them from the test, but they were chosen for that test for the reason that the Primacy 3 is one of those tyres that come close to tyre nirvana, having a particularly good balance of qualities with little in the way of compromise. It also makes sense to compare tyres from the same manufacturer as not only do  they construct their tyres in their own particular way, which produces a broadly similar set of qualities compared to another manufacturer, but the consumer is also likely to be deliberating between these two tyres. Why? well, the person who places a Michelin on their shortlist is generally doing so from a quality or lifespan point of view, thus naturally would look for the same from an alternate season tyre too.

Fitted to the car and settled in, the Primacy quickly demonstrated their superb balance.

The first note I feel I wish to convey is how remarkably refined these tyres are. Never have I driven anything so well damped, so smooth, or so quiet. They exude quality. A point which illustrates this is that in order to carry out this review I had to deviate from the original tyre size coming from 206/60 (Michelin too) to 205/55 so would expect a touch less comfort and a touch more harshness from the lower sidewall height and air volume. To the contrary there is more comfort and less harshness by a good margin.

Wet or dry the behaviour was impeccable. Turn-in is good, being on the more eager side of neutral, neither razor sharp nor sluggish and vague. Point and shoot.  Stability, again composed and on the sportier side of neutral, never having to give them a second thought or allow for any particular handling trait, simply drive the car from A-B. Whether spirited or steady the Primacy were intuitive and trustworthy.

Wear has been good too, they barely look any different to when first fitted. All in all, it was a bit of a wrench for me to have them removed. 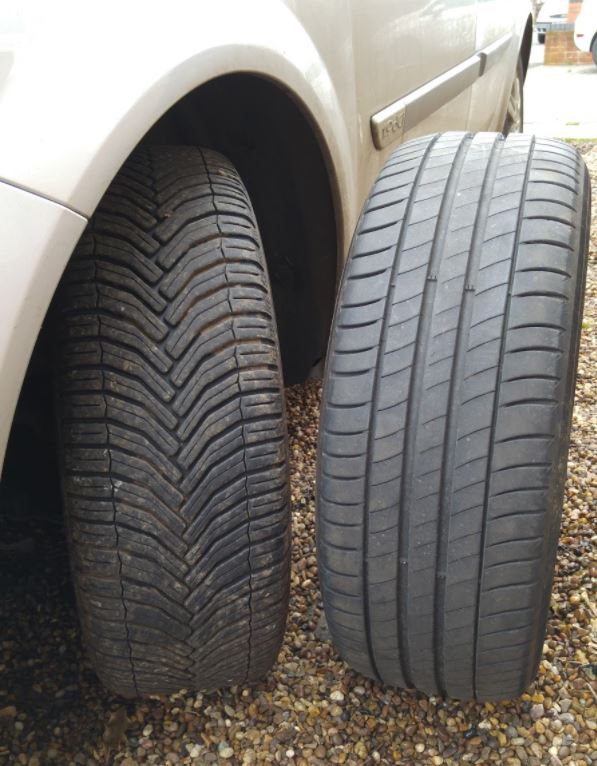 After using the Primacy for a few months these have some very big boots to fill, so how do they measure up?

Surprisingly well as a matter of fact!

Physically handling the tyres, the sidewalls of the Crossclimate are noticeably thinner than the primacy so I was expecting a big difference in turn-in, stability, and comfort. Nope.

Of course there is indeed a difference, but one which the majority of drivers would be hard pushed to identify.  The turn-in is good, on the easy side of neutral as opposed to the eager side of neutral with the Primacy, but, still proved positive.  Stability is the biggest change here. Whilst the Crossclimate do indeed have good stability, I have encountered more rear-end movement creating an edge of oversteer to the cars dynamic which was not present with the Primacy. I feel that again most drivers would not be aware of this. Otherwise they exhibit great stability and a fairly neutral balance. (It is worth noting however that this is the opposite to what was encountered during the track testing on the Octavia, with the primacy having the edge of oversteer and the Crossclimate not. Different cars and different  tyres don’t all behave exactly the same.)

Comfort is no different, which is a good thing, the Primacy are impeccable here. There can be a little more harshness over certain road surfaces, but I’m splitting hairs.  Noise is a little more prevalent with the tyres tread pattern producing a mild hum, though in actuality they are still quiet indeed and much more so than the various winter tyres I have used.

When the temperature plummeted and the frosts started twinkling in the morning the Primacy did noticeably harden and crash around a lot more on rough surfaces and potholes. They weren’t on quite long enough to experience any notable drop in grip but it was obvious this was only round the corner. Pun intended.

Crossclimate fitted, the car regained its composure in the cold, smoothing the road out nicely and feeling like you could rely on it to retain its footing.  In particular during late December, one of the back roads near our house was so engulfed with frost and ice it resembled something you might see on a christmas card, so sheer-white and twinkly it was. I drove with care of course but was able to maintain 30-35 mph with only little twitches here and there. Traversing the same road in our other vehicle still wearing summer tyres resulted in a maximum speed of 20mph on the good bits.

Unfortunately I haven’t been able to test in any snow so far...

So, a few months into the test in early February 2017, are the crossclimate proving a good alternative to a summer tyre, and do they better traditional All-season and winter tyres as a year-round option?

In the warmer months the Primacy are a better tyre, but only by a very small margin. Traditional All-season and winter? Compared to the crossclimate? Forget it.

In the winter things change dramatically but the Crossclimate keeps its head. Much more assured than both Primacy and Trad. All-season/winter when the temp is above freezing but below 7 degrees, but similarly surefooted to All- season and winter when the temp is freezing or just below whilst still feeling more ‘normal’  than either.

Michelin have sure pulled it out of the bag with this one, and then some.

14 months have passed since this test began, so what is my final say?

The Primacy have been refitted for 2 weeks now and have just completed a run from near Sheffield down to Somerset for a week and back again, following the Crossclimate being run into some scorching hot weather to test their mettle.

Did I get over-enthused with the performance of the Crossclimate? Or have the Primacy been a little underwhelming since coming back into service?  Well, Im pleased to report the latter to be the truth. They are still quiet and smooth as ever for sure, but there is stark little difference in driving dynamics. The car is a Diesel MPV 5-7 seat variety yet despite me pushing it around in a manner for which the car was never intended, the Crossclimate have remained positive and surefooted even on the hottest of days.

Both tyres retain my initial impressions, both are very good tyres indeed, so where does that leave us? I'll say this, come late autumn the Crossclimate will be going back on, and staying on. They will, moths in my wallet allowing, be replaced with another set.

If you can afford and/or prefer a dedicated summer/winter set (which still remains the best practice) then Primacy are lovely tyres well worth shortlisting, no mistake, but for a year round, more affordable, more convenient choice, the Crossclimate is without question (at the time of going to press) THE tyre to fit.

Throw them into a ‘blind' test amongst an array of other summer tyres and you would not distinguish them. This subjective test was to ascertain their dynamics in the real world on a real, commonplace vehicle vs an accomplished summer tyre, and in my experience as a pernickety tyre nerd, they stand head and shoulders amongst summer tyres. Yet, they climbed a snowy ski slope along with the best winter and all season tyres…

Both tyres are now updated/to be updated, with the Crossclimate+ already on the market and an imminent Primacy 4 on its way, but this removes no relevancy, the Primacy 3 may see a price drop (will be on sale a while longer) and the Crossclimate+ basically remain the same save for a slight increase in durability giving potential to keep going for a few more seasons. This test was centered around the Crossclimate and its subjective behaviour in both hot weather and snowy, wintery conditions, neither of which the mild reformulation will significantly affect as  their performance is largely down to the tread pattern and tyre structure, which remain unchanged.