So, one of our all time favourite tyres, and arguably the tyre that first got us into rubber has had a facelift! With big expectations the Michelin Pilot Sport 3 certainly has a lot to live up to. Lets see what's new...

TUV have tested the tyre back with the Pilot Sport 2 and found the new tyre has "Better road-holding in bends and three metres shorter braking distance on wet roads", which is a significant change in wet performance. To help us understand better Michelin have published this neat little graph to show the improvements over the PS2. 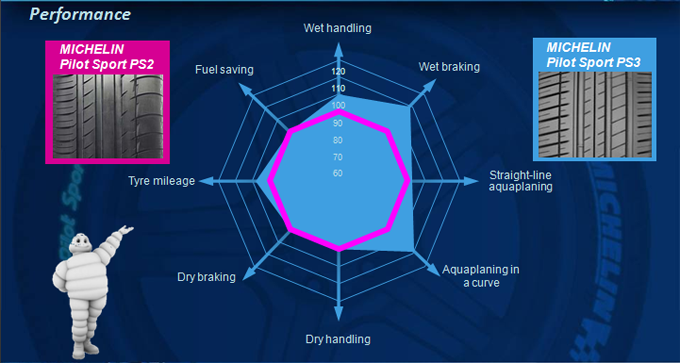 Here at tyrereviews we can't wait to get our hands on a set for a long term test. If anyone from Michelin happens to be reading, please feel free to drop us an email! If you have any experience with the PS3 then please head over to our Michelin Pilot Sport 3 review page and let the world know how good (or bad!) they are.