If you're in the market for a winter tyre in 18 inches and above, or you'd like to continue to use your Porsche during the snowy months, there's only 1 real choice - the Michelin Pilot Alpin range.

Now on its 4th release, the Michelin Pilot Alin PA4 is the only winter tyre available in both an asymmetric and directional pattern, depending on application. The asymmetric pattern, designed to fit cars such as the Mercedes E63 AMG, works best when both the front and rear sizes are the same. The directional pattern, as N rated for the the new 991 911 is designed to work in staggered sizes, where the front and the rear wheels are different widths, and provides the ultimate stability and performance. 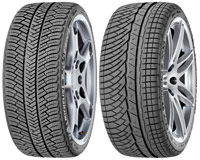 With the introduction of the PA4 comes several new technologies. The first is a heavily grooved tread pattern, with lots of curved and opposing angled sipes. This gives the tyre up to 74% more edges than the previous generation Pilot Alpin (depending on size) ensuring the tyre can cut through any slush / film of water to get to the road surface beneath. The second new technology, called "StabiliGrip", uses three-dimensional intersecting sipes to increase the rigidity of the tread blocks, offering an excellent steering precision and stability mid corner. The third new technology is dubbed "HelioCompound 3G", which is Michelins patented third generation of the silica based rubber compound which utilises sunflower oil for better softness in extreme conditions.

Not one to be shy, Michelin commissioned both independent tests of the new PA4, and gave us keys to a group of new 991 997s to do some snow and ice driving, while directly comparing the Michelin tyre with the Pirelli equivalent.

While we couldn't be as scientific as the independent testing, which over 2000 braking tests found the Michelin to stop on average (from 50kph) in 35.36 meters, compared to the average from a Dunlop Winter Sport 4D and Continental Winter Contact TS830P to be 38.76 meters, we did find the Michelin to be noticeably sharper on the front axle than the Pirelli, offering a much more stable turn in on snow and ice, while offering broadly similar braking and traction in and out of the corners.

More impressive was the road section of driving, in an 525bhp E63 AMG. On a cold damp road, the Michelin winter tyres impressively withstood the 700nm of torque, allowing the Mercedes to flex its muscles away from the traffic lights without drama, something that's impressive even on a summer tyre!

The N rated Pilot Alpin 4 took 4 years to develop, and Michelin created over 20 different tyre specifications equating to over 2000 tyres tested before the homogenisation of the 20" winter tyre.

Here's a short video where Porsche describe their close relationship with Michelin.

The Michelin Pilot Alpin 4 is available in 18-21 inch sizes, with the Michelin Alpin 4 catering for the smaller 14-17 inch range.