Michelin have long been leaders in motorcycle tyres, and in 2015 Michelin have significantly updated their hypersport and track range of motorbike tyres. Using lessons they've learnt from 360 Moto GP wins, and 26 world titles, Michelin have brought the racing DNA to road legal and track tyres.

While six new tyres have been launched, we've been out testing two of the most interesting tyres released, the Michelin SuperSport EVO and the Michelin PowerCup EVO. 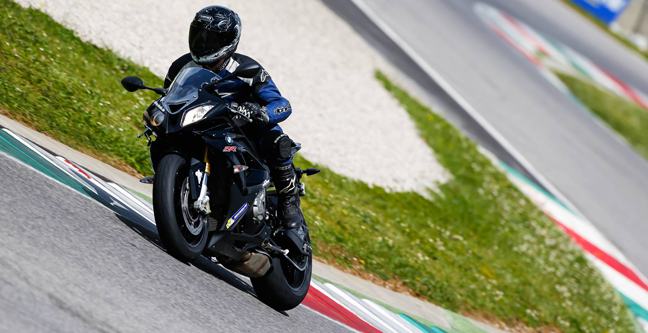 Using a mix of litre superbikes, including the Ducati 1299 Panigale S, BMW S1000RR HP4, Aprilia RSV4 RF and 2015 Yamaha R1, both patterns of tyres were given a workout around the Italian MotoGP circuit at Mugello. As one of the fastest circuits on the MotoGP calendar, Mugello perfect for tyre testing the high speed stability and braking performance of Michelin's latest rubber.

The new Michelin SuperSport EVO is the evolution of the highly successful SuperSport. Designed for 50% road, 50% track, the SuperSport EVO has kept the SuperSports excellent road manners, while hardening up the tyre for a larger amount of track use, making this one of the best blends of compromises for the UK fast road / trackday rider.

Not just satisfied with improving the compound for better heat control, Michelin have developed ACT technology for the new range of tyres. ACT, or Adaptive Casing Technology, is a new way of laying the casing plies in a way which gives variable stiffness depending on the lean angle. This technology allows the crown of the tyre to stay flexible, for added straight line stability, while also allowing the sides of the tyre to remain stiff, to give the ultimate cornering performance.

When all this is combined with a 2CT (Two Compound Technology) front and 2CT+ rear, it results in a 2 seconds faster lap in the dry around a circuit like Jerez which is a huge improvement.

At Mugello, the new tyre shone. It was warm enough to push in under a lap, which bodes well for fast road riding, and offered plenty of both straight line, and cornering stability, with only the powerful 1299 and R1 really giving the rear something to moan about out of 3rd gear corners. Braking was strong and stable, and extreme lean angles felt very good for a road bias tyre. It also took a morning of hard laps extremely well, and while the wear was visible no one reported the tyre to be overheating / falling apart which can be a common complaint of road bias tyres on track. In short, Michelin have delivered exactly what they've promised with the SuperSport EVO

Where do you go when you want to progress to an even higher percentage of track work, but would still like to retain a road legal tyre? The Michelin PowerCup EVO is the most focused of all the road usable motorbike tyres, and offers even more grip and stability over the SuperSport EVO.

The original PowerCup tyre was offered in three compounds, A, B, and C, which would be selected based on the type of bike, weather and riding you were expecting. Unfortunately while choice is good, it caused a lot of confusion with the riding public, and many people didn't like hte idea of the potential to need multiple tyre choices depending on the weather.

In response to this Michelin have reduced the choice of compound to one. While this might seem like a step back, in testing the new PowerCup EVO beat the PowerCup A, B and C compounds in their intended temperature ranges, meaning the new tyre is faster than the three versions of the old tyre in all conditions.

On track the PowerCup EVO impressed, offering even more stability and performance than the SuperSport EVO, and with most riders improving their laptimes by around 3 seconds, if you're after the ultimate road legal speed, the PowerCup EVO is the tyre for you.