It's been over 10 years since the Uniroyal Rainsport 2 was launched with the firm goal of being the "best in wet". 10 years later and the Rainsport 2 is still putting on a good show in group tests, and getting excellent reviews about the wet weather performance it provides, but its age is starting to show and it's getting slightly bested by modern rivals.

In order to restore the title of best in wet, Uniroyal have launched the Rainsport 3. With an aggressive tread pattern which combines both the water dispersion abilities of a directional tread with the stiffer shoulder blocks and construction of an asymmetric tyre, the Rainsport 3 promises to regain its lead in the wet tests, while hopefully addressing some of the criticism of the old tyre, such as dry handling, noise and rolling resistance.

The main new technology in the Rainsport 3 is "Shark Skin" technology. This features as very small grooves in the water channels to reduce the flow turbulence and evacuate more water at similar speeds. At 80 kph, at tyre hitting 8mm of standing water needs to displace 30 litres of water a second, and with on average 11 wet days per MONTH in London between April and October (summer tyre season) the importance of good aquaplaning properties become apparent.

The new tread pattern offers several advances over both the old directional "V" pattern, and the new asymmetric designs. By keeping strong diagonal water channels this can be combined with the 2 large water channels to displace a large amount of water per second. The new asymmetric construction allows the tyre to be constructed in a way where by the carcass has a very uniform stiffness, which allows good handling properties and an even wear over the life of the tyre. This in turn provides none of the noise issues which the directional Rainsport 2 tyre had as it wore.

Available from 14 to 21 inches, every Uniroyal Rainsport 3 has an A in wet braking, showing the progress which has been made. When combined with a 13% improved rolling resistance over the outgoing tyre, the new Rainsport 3 looks to be a very promising mid range tyre. 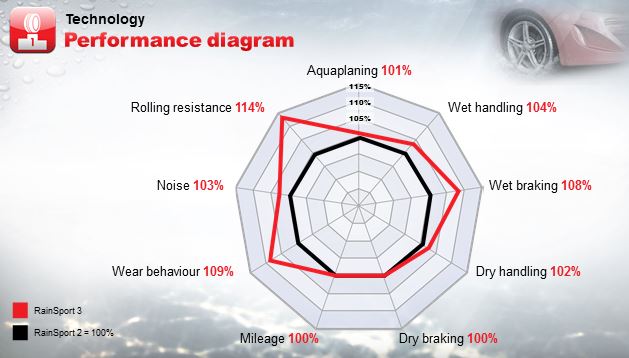