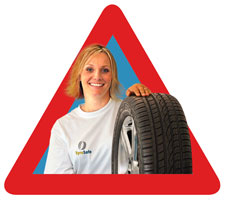 The good folks over at TyreSafe.org have drafted in the lovely Vicki Butler-Henderson and officially launched their first ever "Tyre safety month".

Their efforts are being concentrated on tyre pressures and wear, calling under inflated tyres a "threat to road safety" as well as highlighting the improved MPG and CO2 emissions you can achieve when your tyres are properly inflated. According to TyreSafe, almost 25% of cars and vans on the roads in the UK have at least one badly worn or illegal tyre.

Nearly all the primary tyre retailers in the UK have signed up to support the tyre safety campaign and are offering free tyre pressure and safety checks at participating outlets.

There's no excuse of not having the correct equipment this month. Under inflated tyres can overheat their shoulders causing catastrophic failure, more often than not at motorway speeds due to the nature of heat build up. Over inflated tyres wear more down the centre of the tread meaning they more easily aquaplane causing loss of vehicle control in standing water.

Head over to the TyreSafe website, there's a free online pressure checker - simply enter your registration and it will tell you the manufacturers recommended pressures for your car.

In the next month TyreReviews.co.uk will be highlighting the dangers of neglecting your tyres with some graphic photo evidence. Stay tuned...

Vicki Butler-Henderson is strangely hot... the tyre isn't helping things
Posted at 2007-10-08 23:45:59 | Was this comment helpful? Please login to vote
Thank you for voting