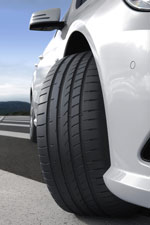 It's not often you get the opportunity to try different tyres on identical cars one after the other, so when we were presented with 3 Audi A7's wearing 3 different max performance summer tyres in 255/40 R19 there was only one thing on our mind - a subjective handling shootout!

The A7s were fitted with 3 of the newest max performance summer tyres, the Bridgestone Potenza S001, Continental Sport Contact 5P and Goodyear Eagle F1 Asymmetric 2. With the raw performance of such tyres being extremely close, we were more concerned with how they felt during turn in, pushing hard mid corner, how they reacted past the limit, and under braking and what sort of feedback they provided.

Armed with a notebook and data logger, we hit 2 different sections of track. One warm and dry, and the other artificially wet with various levels of standing water from a damp surface to 1cm of water.

The Results? As expected the raw grip was extremely close, leaving the scores primarily based based on subjective feel and handling, rather than outright laptime.