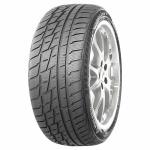 Nexen WinGuard SUV - 70%
Sorry, we don't currently have any label data for the Pirelli Scorpion ICE plus SNOW

Questions and Answers for the Pirelli Scorpion ICE plus SNOW

No it is not recommended to use a dedicated winter tyre like the Scorpion ICE&Snow year round.

Given 65% while driving a Jeep Grand Cherokee 2.7 LTD (235/60 R18 R) on mostly country roads for 5,000 average miles
I live in rural NE Scotland and have had my Pirelli Scorpion Snow and Ice Tyres fitted on my Jeep Cherokee 2.7 CRD Ltd Edition every year since 2011 in Novemeber as winter arrives and removed in April.
Winters have been quite mild the last few years so no great snow falls lying around for long periods of time, I would not say the tyres were really put to any test until Januuary 2nd 2015 when I was coming down quite a steep tarmaced road (in 4 WD) , no snow just ice which I did not really see until the vehicle took off on its own path and had I not hit a sign post which halted the Jeep before dropping into a small river ravine, I had no control whatsoever and was very lucky.
I now have no confidence in the Snow and Ice Pirellis doing what they were supposed to do ! Stop me from sliding on ice. There is plenty tread left on these tyres.
31 - tyre reviewed on May 24, 2016

Have you driven on the Pirelli Scorpion ICE plus SNOW tyre?

Have YOU got experience with the Pirelli Scorpion ICE plus SNOW? Help millions of other tyre buyers

Given 47% while driving a Honda CRV (215/65 R16 H) on a combination of roads for 16,000 spirited miles
Had tyres on Honda CRV for 3 Scottish winters now , but sadly I'm underwhelmed.
I'd have expected more from a Premium brand like Pirelli.
Progressive grip l is non existent , wear on dry roads is rapid & unfortunatemy noisy.
Had next to no snow here in 3 years so didn't score them on that (nor ice.)
I had a set of Winter Yokohamea on.my is200 that were much better ..
Won't be buying again & will be switching to Cross Climates all round asap - can't go wrong - Colin
0 - tyre reviewed on January 11, 2020
Given 83% while driving a Land Rover Freelander 2 (225/70 R16 V) on a combination of roads for 30,000 spirited miles
Amazing winter tyres
Among my experiences:
I once drove without realising in a modest river bay (water was flowing only in summer) but was covered in snow and couldn't see it. After a couple of tries i managed to get out .Very good grip on snow and ice. Was able to go up a very slippery hill covered in ice (was about 20-25 degrees).
Also i had to rush someone to the hospital on a road with about 15-30 cm of snow for about 10km - the tyres behaved exemplary at over 100km/h
However... Snow breaking is average... Car would slip like on ice even though its just snow. Engine breaking recommended.
On mud the tyre is above average but not great.
Also, the tyre is very very soft so on dry roads doesn't behave as good, especially in tight turns. Other than that its very confortable.
I had it for 4 winters and could easily go though another one but two of the four tyres were penetrated by accident by some nails or something and they kept losing pressure every couple of days so I got rid of them.
0 - tyre reviewed on October 11, 2019
Trying to pick the very best all season tyre? Watch this!

Given 90% while driving a Land Rover Discovery 3 (255/55 R19) on a combination of roads for 53,000 average miles
I normally do not write reviews for products I have used, but this time I thought these tyres deserved one. I have just changed back to the set of summer tyres and realised that these winter ones have done an amazing 52.695 miles in total in 10 winters! And they seem to have enough tread depth to last for at least another season next year... They have been great on long motorway journeys, twisty & snowy & icy country roads, city commuting, and the occasional (not too technical) off-road excursion. Fantastic on both ice & snow (we live near Munich, where there tends to be a lot of both during the winter months) and are not noticeably affected by very low (-20C) temperatures. We have a couple of times rescued other cars which had slid into a ditch on icy roads. To be fair, our driving style is not aggressive at all - but then again, our car is a rather heavy one - so I do not know how these tyres will feel on a sporty car. If you want a set of tyres that will perform very well in winter weather and will last for a long, long time, I can fully recommend these.
1 - tyre reviewed on April 24, 2018